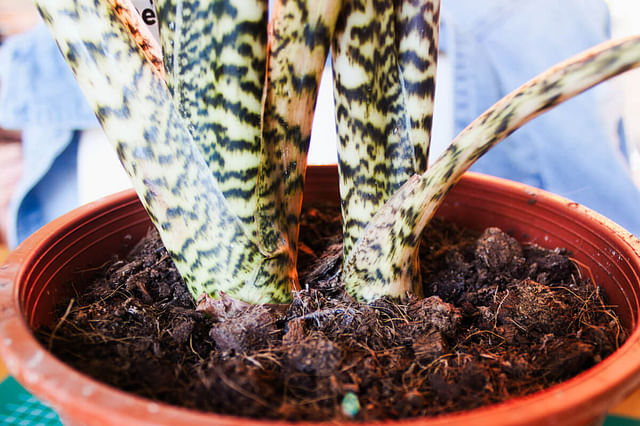 How to repot an Alocasia Zebrina

If you're taking great care of your Alocasia Zebrina, it'll grow larger and larger. If you're having trouble with growing this plant, be sure to check out my other guide "How to care for a Zebrina Alocasia". This will tell you exactly what you need to know to grow this plant and to eventually end up in this situation: My plant is too large and I need to repot it! That's where this guide comes in, I'm going to show you the process for repotting the Alocasia Zebrina, including photos. The process goes from taking the plants out of the pot, all the way to planting the two separate plants in two pots.

You can also keep the two plants together and repot them into a bigger pot. In this case, you can just pull your plants out of their current pot and place them in a bigger pot. After you've done that, add soil until the pot is full. But that's not what we're going to focus on for this guide. We're going to completely repot the Alocasia Zebrina in a new pot, by removing all of the soil from its roots.

These are the steps we'll be going through in this guide:

You can click any of the links to go to that section.

Pull the plant out of the pot and check the roots

The most important reason for repotting a plant is to give it more space to grow. In my case, this meant that I had to separate two different plants into two pots. They were getting in each other's way and both needed more space for themselves to keep growing. Before your repot your plant, you'll want to check the roots. Do the roots still have enough space to grow or are they having trouble finding new places to grow to? To check the roots, pull the plant out of your pot and check if the roots are similar to the picture below: 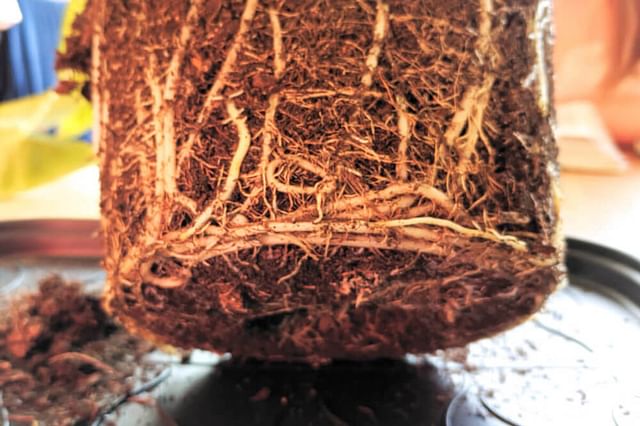 The roots took over the whole pot and even started to circle the pot at the bottom. This means the plant needs to be repotted, it doesn't have the space it needs to grow any further. If you're encountering something that looks a bit like the roots in the photo, you can choose to just repot everything into a bigger pot or separate the two plants. As I said earlier, the plants were getting in each other's way, so I chose for the latter. This meant I had to start to separate the roots.

Remove the dirt from the roots

Since I wanted to separate the two plants into two different pots, I had to remove the dirt from the roots. This is an optional step, but if you're also separating two or more plants, you'll need to do this as well. Removing the dirt from the roots makes it much easier to keep the roots intact when you're separating the two plants. The roots are very tangled and just by ripping the plants apart, you risk killing it. I took a very cautious approach and removed most of the dirt before attempting to separate the plants.

By removing the dirt, it's much easier to untangle the roots by looking at it, but the Alocasia roots are also clinging onto the dirt. This means they really don't want to let go. So simply pulling the roots will most likely damage them. To give the separate plants the best chance of survival, make sure you keep a large majority of the roots. 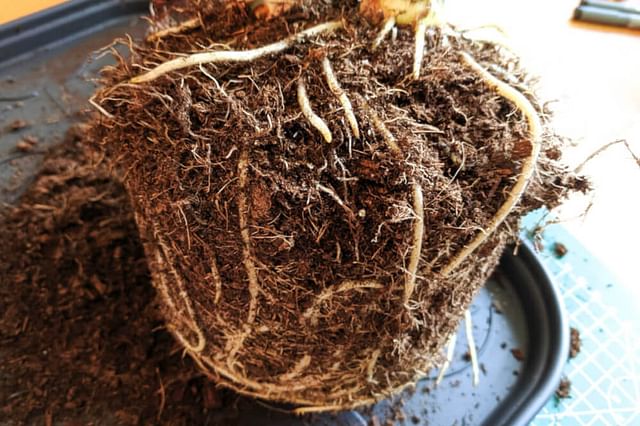 The Alocasia Zebrina is clinging to the dirt

At the point in time when this photo was taken, removing the dirt got pretty difficult. There were so many roots that it took a good 20 minutes before I was able to remove almost all of the dirt from the roots. The roots were doing their best to hold onto the dirt. This meant I had to dig in this ball of dirt and roots with my fingers for a while until the roots were mostly clean and I could see how they were tangled up. 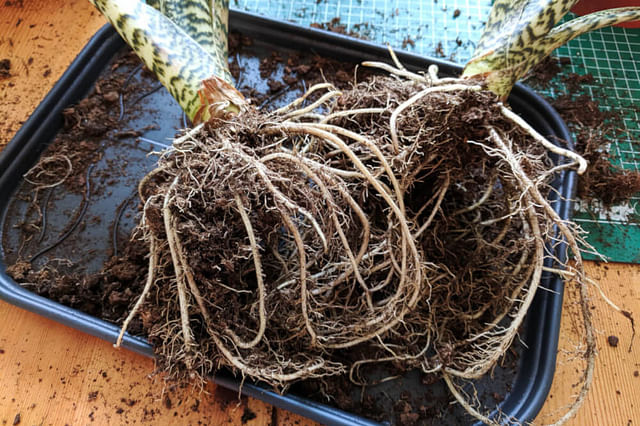 Alocasia Zebrina with clean roots, after all dirt is removed

After you've removed the dirt from the roots, it's quite easy to untangle the roots. You should have something like in this picture. You can clearly see it's two different plants, with each their own roots. If you've been careful with removing the dirt from the roots, untangling should be quite easy and you should have very minimal damage to the roots and the stems of the plant. I didn't have any damage myself, the stems and leaves were still looking great and I couldn't really see any problems.

As you can see, the roots are very complex and are built to really hold on to the dirt. It took a while to get clean, but when it was clean in the end, it was easy to deal with. Now that you've separated the plants you can go to the next step.

Plant each plant into its own pot 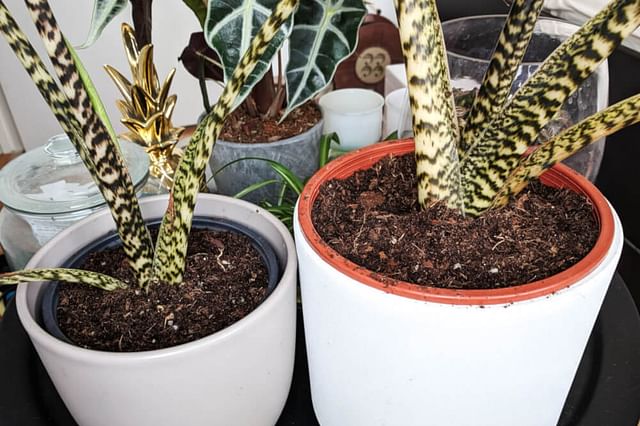 Alocasia Zebrina's after repotting them into separate pots

Now the exciting part is finally happening, you get to plant these beautiful plants in their own pot. As described in my previous guide about the Alocasia Zebrina "How to care for a Zebrina Alocasia", I keep the plant in the nursery pot. This has the sole reason that it's very easy to water a plant like that. The bigger pots they're in don't have any draining holes, so keeping the plants in the nursery pot helps me to drain the excess water from the pot instead of it sitting at the bottom of the pot.

In order to plant these Alocasia's, you should prepare some soil to pot your plants in. This Alocasia likes soil that's very well draining. You can reuse the soil you used before and supplement it with some fertilizer and some additional soil. This will give your plant plenty of vitamins to keep growing and settling in its new environment quickly and smoothly. I watered my plants right away, just to give it a chance to soak up the nutrients. If you've just watered your Alocasia's and the stems are not drooping yet, you should hold off for a few days. You don't want to overwater your plants.

Now keep a close eye on the moisture levels in the soil and water the plant when you see it's starting to droop, just like you have before. The plant should get adjusted to the new environment in a few days to a week.

Thank you for reading this post! I hope it helps you to keep your plants healthy and beautiful! If you're looking for more guides on specific plants, you can always request a plant guide to get a guide for the plant you have trouble with.

Other common names for this plant

Are you ready to put your new knowledge into practice?

Get your own products from the links below and support us in our mission to help people take care of plants like this.

This page contains affiliate links. Support me and my mission by ordering through my links. Thank you!

You can find more relevant information about this topic here: 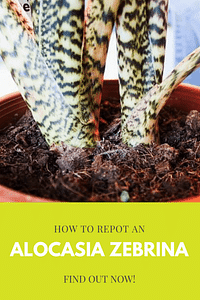 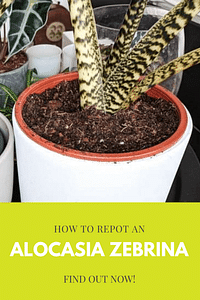 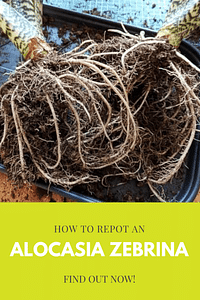 Get a PDF copy 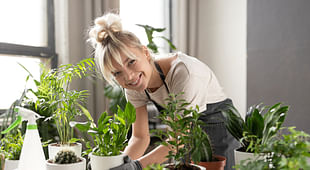 Learn the basics of taking care of plants to help you keep your plants healthy for years! 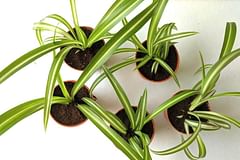 Everything about repotting a spider plant 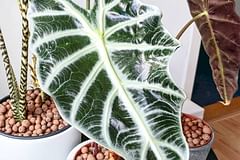 The pros and cons of using Leca to grow your plants 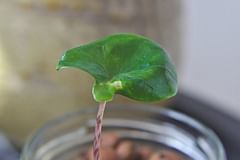 How to propagate an Alocasia Zebrina 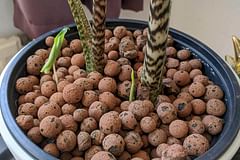 How to grow an Alocasia Zebrina in Leca 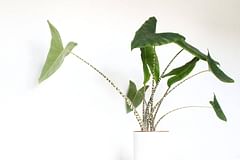 How to care for an Alocasia Zebrina 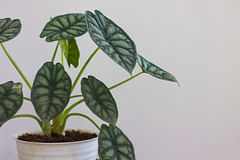 How to care for an Alocasia Silver Dragon 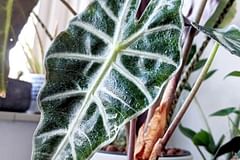 How to care for an Alocasia Polly